As described in the General Procedure, runoff hydrographs are added to your model by clicking one of the Runoff Hydrograph buttons on the Ribbon Toolbar at the Main Window. In this case, click the [NRCS] button. After the icon has been added, simply click on its icon or row, depending on which tab you are working from, to populate its input window. Then fill-in-the-blanks for its data and click [Compute].

Remember that the program will use the active Return Periods, Design Storm and Precipitation values as set in the Rainfall Wizard. There’s no need to enter any rainfall data here.

The following is a description of each of the required input items.

Name Prefix
You can include a prefix (“Pre”, “Post” or nothing to your hydrograph Name field with a single mouse click. This saves precious keystrokes when doing a pre- and post-development study and you want to identify those hydrographs that are “Pre” or “Post” development. The chosen prefix will be added to the front of the Name label on the Basin Model and throughout the software, for example, Tables, Charts, Reports, etc.

Name
Enter any descriptive name for this hydrograph. It will appear on the printed reports as well as the Basin Model.

Curve Number, CN
Enter the SCS Curve Number for this area. A table of CNs is available by clicking the Lookup button.

Due to the nonlinear character of NRCS hydrograph equations, inaccurate runoff estimates can result when mixing pervious and impervious surfaces within a drainage area using an area-weighted average Curve Number. This combination can imply a significant initial loss that may not actually take place and will be particularly acute for small rainfalls where the large (but incorrect) initial loss can be 50 percent or more of the total rainfall, thus underestimating the runoff.

For this reason, we highly recommend employing the Weighted Volume method as it is always correct, regardless of the CNs and rainfall amounts.

Here are two hydrographs generated using both methods. Notice the dramatic difference between the two when the rainfall is below 4 inches (100 mm). 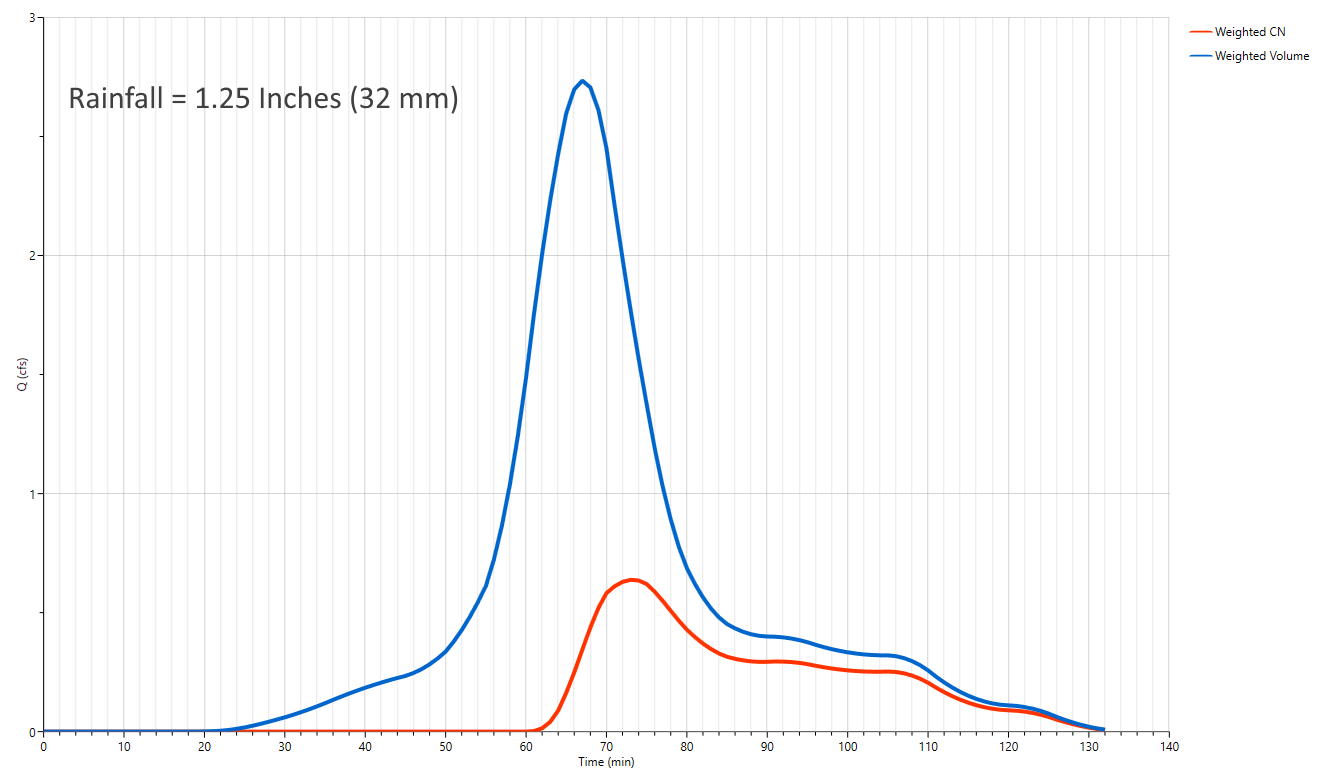 With higher rainfall both methods produce hydrographs that are nearly identical.

Time of Concentration, Tc
Tc is the time it takes for runoff to travel from the most remote upstream point in the drainage area to the downstream point in question. Select one of the four Tc options from the drop-down list box.

User – Check this option to override the computed Tc and enter Tc manually.

Lag – The TR-20 default method. Use this when the area is of a homogenous nature. Think agricultural land.

Kirpich – This method is normally used for natural basins with well defined routes for overland flow along bare earth or mowed grass roadside channels. It is similar to the Lag method but will typically give shorter times compared to the Lag method. Use this method when the subarea is dominated by channel flow.

If you chose Lag, Kirpich or TR55, click the ellipsis […] button to open the corresponding input screen. There, Tc will be computed and automatically inserted into the Tc input box.

The Shape Factor
The Shape Factor (a.k.a Peaking Factor) is a component of the NRCS method which affects the temporal pattern or shape of the Unit Hydrograph. This factor is typically 484 (0.208 metric). Check local ordinances. This value can be changed or set in the Project Settings.

Michigan DOT uses a shape factor of 368 so that 28.5% of its volume is under the rising limb. This method is referred to as the MDEQ-SCS Method and can be replicated with Hydrology Studio by simply changing the Shape Factor to 368.