Stormwater Studio uses the energy-based Standard Step method when computing the hydraulic profile. This methodology is an iterative procedure that applies Bernoulli’s energy equation between the downstream and upstream ends of each line (Pipes and Channels) in your system. It uses Manning’s equation to determine head losses due to friction. Losses at junctions are computed using the methodology prescribed by HEC-22, Third Edition or the AASHTO method. It will use FHWA HDS-5 methodologies at upstream headwalls for inlet control.

The greatest benefit to using this method is that a solution can always be found regardless of the flow regime. This method makes no assumptions as to the depth of flow and is only accepted when the energy equation has balanced.

The following equation is used for all flow conditions:

Friction losses are computed by:

Stormwater Studio computes the energy and hydraulic grade line in a fashion similar to methods used for open channels. The program begins computing at the most downstream line and works in a standard step procedure upstream. This method assumes the starting hydraulic grade line elevation, HGL, is known. In other words, you may specify a starting tailwater elevation.

Stormwater Studio will use this entry as the starting water surface elevation when computing. You have three options:

Must Be Above Critical Depth

Water surface profiles, initially, must begin at or above critical depth in order to achieve a proper energy balance.

Crown – The is the default setting. This elevation will begin at the top of the pipe. To choose Crown, simply enter a blank value, zero, or the letter “c” or “crown” (no parentheses).

Normal – This will compute normal depth for the pipe and use it for the Tailwater Elevation. If normal depth is less than critical depth, then critical will be used instead. To choose Normal, type in the letter “n” or “normal” (no parentheses).

The downstream or starting EGL Down for incoming, upstream Line(s) is based on the computed EGL of the downstream Line plus any junction losses. This becomes the starting EGL (EGL Dn) for these incoming Lines. The starting HGL is computed by subtracting the velocity head from the EGL Dn. This method eliminates any energy discontinuities that may occur, such as when a pipe decreases in size in the downstream direction, pipe slope increases or when there are other dramatic changes in flow rate or inverts across the junction. 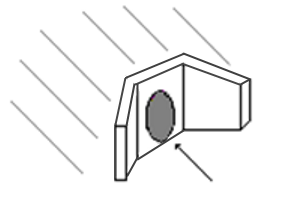 Pipes with Headwalls at their upstream ends can flow under two regimes;

Stormwater Studio computes the hydraulic profile assuming both exist, and then selecting the one that produces the highest headwater. This is designated on the reports under the HGL Junction column. The values will be appended with either “ic” or “oc” indicating Inlet Control or Outlet Control respectively.

Note that the calculation option, “Check for Inlet Control” must be checked On for this procedure to take place. If Off, only outlet control will be considered and there will be no “ic” or “oc” appendages.

Outlet control is always calculated for the Headwall junction type as described in Energy Grade Line.

It is assumed that the pipe material matches the selection on the Home tab under the Pipe Color option. The above procedure follows the FHWA HDS-5 methodology.

Want to learn more? See, Water Surface Profiles for Storm Sewers in Further Reading for an in-depth article on this topic.