Hydrology Studio can divert any hydrograph into two separate hydrographs. This will be useful during situations when channels divide or when pond outlet structures such as an emergency spillway are designed to redirect the outflow somewhere. Diverting can be useful if you need to strip off a “First-Flush” volume before allowing the remaining hydrograph to enter a detention pond.

To divert a hydrograph, select it first by dragging a rectangle around it with your mouse or alternatively, click on the icon. Then click the [Divert] button on Ribbon Toolbar.

Two new Diversion icons will be added to your model. For example the following model shows a Pond Route hydrograph was selected and split into two using the Divert function. 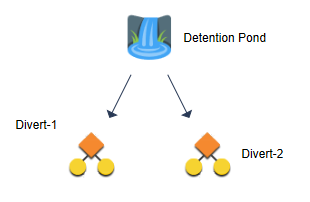 Click on one of the two icons or row, depending on which tab you are working from, to populate its input window. 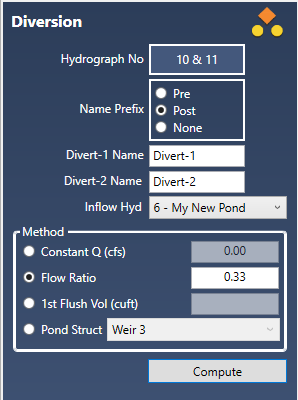 The following is a description of each of the required input items.

Name Prefix
You can include a prefix (“Pre”, “Post” or nothing to your hydrograph Name field with a single mouse click. This saves precious keystrokes when doing a pre- and post-development study and you want to identify those hydrographs that are “Pre” or “Post” development. The chosen prefix will be added to the front of the Name label on the Basin Model and throughout the software, for example, Tables, Charts, Reports, etc.

Divert-1 Name & Divert-2 Name
Enter any descriptive name for each outflow hydrograph. They will appear on the printed reports as well as the Basin Model.

Inflow Hydrograph
Select the inflow hydrograph from the list box. Was pre-selected but can be edited at any time.

Flow Ratio
This method divides the inflow hydrograph by a ratio. An entry of 0.75 generates a hydrograph, Divert-1, with flows equal to 75% of the inflow ordinates and a second one, Divert-2, consisting of the remaining 25% flow ordinates.

This feature allows you to strip off an initial volume (WQv) from the inflow hydrograph thus creating a “notch” in the runoff hydrograph. 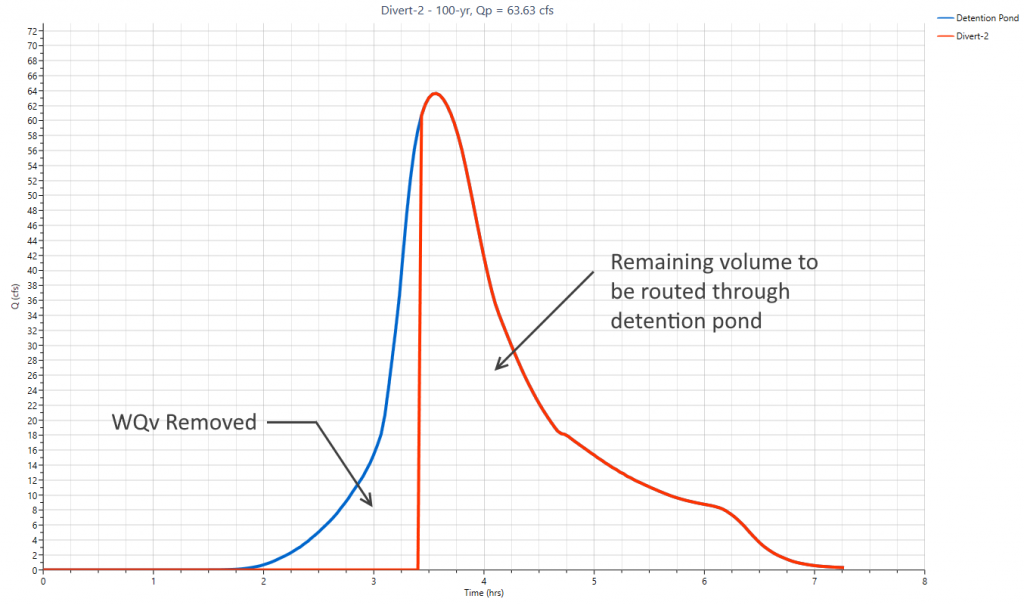 Note that the software increments through successive hydrograph ordinates, at the Time Interval used, summing up the hydrograph volume along the way until the First Flush Volume is either reached or exceeded. This often results in the cumulative volume being a little higher than what you inputted. Smaller Time Intervals will lessen this difference.

Pond Structure
Provided the inflow hydrograph is a “Pond Route”, you’ll have the added option of dividing the hydrograph by one of the pond’s outlet structures. For example, if the pond has a culvert and a weir structure and you want to redirect the weir flows off site, you can select the weir structure. Two hydrographs will be created; one, Divert-1, consisting of the weir flows; and the other, Divert-2, made from the remaining flows.