The Rational method was developed over 100 years ago and continues to be used for urban watershed modeling, typically on areas less than about 20 acres. While there exists many varieties of the Rational method, Stormwater Studio uses the most popular… the Standard Rational.

The Standard Rational method computes the peak discharge as determined by the well-known Rational formula.

The rainfall intensity is computed by one of the following equations:

Where:
B, D and E are constants
Tc = time of concentration in minutes subject to the Minimum Tc

Appropriate values for X are 8 to 180 minutes subject to the Minimum Tc.

The B,D and E constants can be pre-computed by the program, or as manually entered, and are based on your geographic location. Polynomial coefficients can be directly entered in to software as well.

The time of concentration is the time required for water to flow from the remotest point of the drainage area to the point of the system in question. The program computes Tc by choosing the greatest of the following: 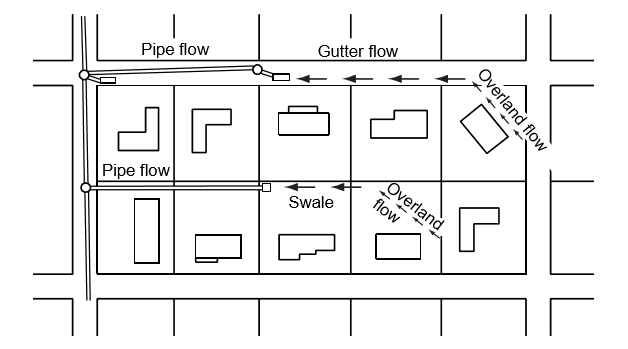 In addition to manual entry, Stormwater Studio can compute Time of Concentration using TR55. With TR55, Tc is broken into 3-components or segments. The final Tc is the sum total of the three components.

After about 100 feet, sheet flow becomes shallow concentrated flow. The computed Average Velocity described below is based on the solution of Manning’s equation with different assumptions for n (Manning’s roughness coefficient) and r (hydraulic radius, ft). Per TR55, for for paved areas, n is 0.025 and r is 0.2; unpaved areas, n is 0.05 and r is 0.4.