Much focus has been given lately to water quality. Acronyms such as, “BMP”, “LID”, “WQv”, CPv, Extended Detention, and so on, are on the hydrology scene and are quickly defining new standards. One such term contains more than just a few letters, “Full Spectrum Detention”, and another (my favorite) is Volumetric Detention. We believe it will soon become the new normal for designing detention ponds. Here’s why:

Outflow hydrographs from traditional detention facilities tend to be “flat-topped” and broad, maintaining flows near the maximum release rates for relatively long periods of time. Even though they match the peak flow rates of pre-developed conditions, the entire hydrograph does not.

Problem is, the Pond-routed outflow hydrographs, designed to match pre-developed conditions, have more volume than the original.

Research suggests that this change in hydrology can cause channels to expand well beyond their original size. Channel erosion, on average, is estimated to account for up to 75% of the sediment load in urban watersheds. Other reports suggest that the most commonly practiced form of channel protection, 2-year control, does not reduce channel erosion and may actually increase the amount of time the channel is exposed to erosive flows.

Notice in the chart below where the location of the increased volume from the Pond-Routed hydrograph occurs… beginning at hour 4. It produces, on average, 2 to 3 cfs above the Pre-Developed condition for approximately two hours. Since we cannot reduce post-developed volume, there needs to be a way to at least relocate the additional volume further down the time line so that the Pond-Routed hydrograph better matches the Pre-Developed, the original. 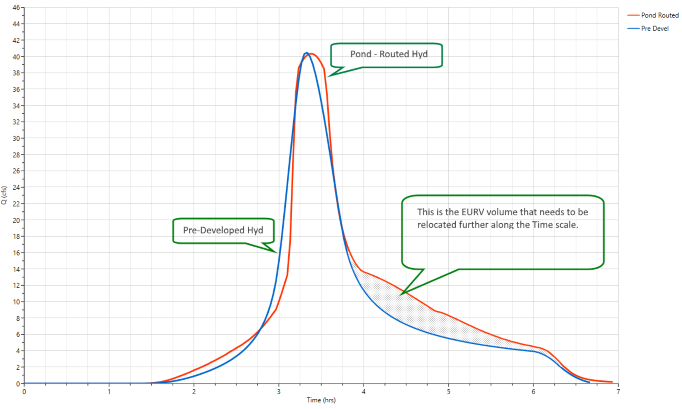 One Approach to a Solution

Design criteria for stormwater detention design have evolved from a focus on the minor and major events to a new approach shown to better control peak flows for a wide range of events. Namely, “Full Spectrum”.

Full spectrum detention addresses the limitations of traditional detention by producing outflow hydrographs that replicate the shape of pre-development hydrographs. This approach reduces urban runoff peaks to levels similar to pre-development conditions over an entire watershed, even with multiple independent detention facilities.

Full Spectrum focuses on two water quality volumes and their drain times. It also considers the 100-year storm event. The goal is to release these volumes over longer times in order to reduce pollutant loading as well as channel erosion and enlargement.

WQv (Water Quality Volume) is your typical frequent runoff volume commonly called a first-flush volume. Refer to your local drainage criteria for determining its quantity but it’s typically equal to the 2-year volume. The criteria is typically to provide a 12-hour drain time.

Also referred to as Excess Urban Runoff Volume or EURV. The EURV volume is the difference in volume between the developed condition and the pre-developed. Channel protection volumes, CPv, are commonly estimated to be equal to the 1-year, 24-hour post-developed runoff (hydrograph) volume. An easy and accurate method of finding this volume is to simply generate a 24-hour post-developed hydrograph for the 1-year return period.

The recommended channel protection criterion is to provide 24 hours of drain time. This runoff volume is captured and gradually released over a 24-hour period so that critical erosive velocities in downstream channels are not exceeded over the entire storm hydrograph.

How to Model WQv and CPv

Hydrology Studio has features that enable you to model using this method. Step 1 on the Pond Designer window contains an input screen located just below the Storage Estimate inputs. 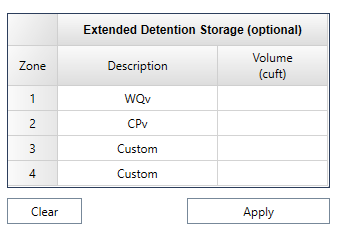 It has four zones where you can specify volumes and their descriptions. Once entered, they will automatically appear on the Stage-Storage plot in Step 2. This data will help guide you, indicating the depth in your pond corresponding to the WQv, CPv and the two custom volumes.

It also provides a guide on the Stage vs. Drain Time plot at Step 3, where you enter your pond’s outlet devices. There you can make adjustments to your orifices in order to achieve the required drain times.

The Stage vs. Drain Time plot is available at Step 3 – Add Outlets. This chart provides an excellent visual guide as shown below. Just make adjustments to your outlet devices until the desired drain time is achieved. 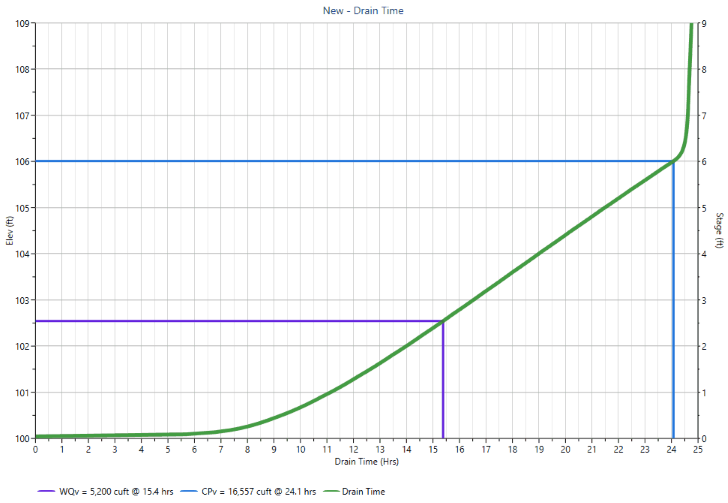 The chart above shows a drain time of 24.1 hours for the CPv volume and 15.4 hours for the WQv. CPv and EURV volumes are typically two to three times the water quality volume (WQv) and the release rates are generally comparable. Therefore, designing for CPv typically results in a design that also meets the recommended drain time for treatment of the WQv.

Once you have “dialed-in” your drain times, the Outlet Schematic provides the elevation at which to set your Riser weir for the 100-year event. 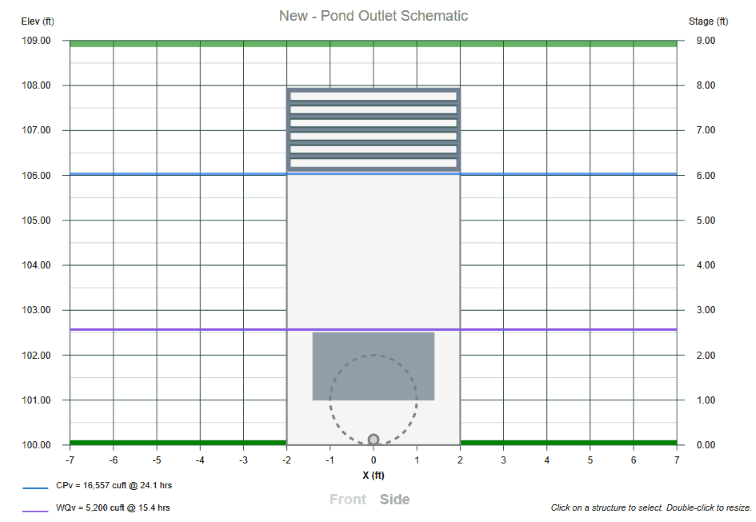 The lower crest elevation of this sloped riser weir is set equal to the CPv elevation.

An Even Better Approach

Yes, there’s yet another way (arguably more effective and easier to design with) to conquer the evils of post-development volume. It’s a criterion called “Volumetric Detention”. It’s now a part of Hydrology Studio. It’s built-in, fully automatic and far easier to achieve a detention pond that serves both peak release criteria and volume. So dump BMP, LID, WQv, CPv and learn more about Volumetric Detention Design.