An inlet in a sag, or sump, has no longitudinal slope, i.e., the gutter slope equals zero. In addition, inlets in sags capture 100% of the flow and thus no bypass flow.

Inlets in sag locations operate as weirs under low head conditions and as orifices at greater depths. Orifice flow begins at depths dependent on the grate size or the curb opening height. At depths between those at which weir flow definitely prevails and those at which orifice flow prevails, flow is in a transition stage. At these depths, control is not well defined and may fluctuate between weir and orifice control.

The efficiency of inlets in passing debris is critical in sag locations because all runoff which enters the sag must be passed through the inlet. Total or partial clogging of inlets in these locations can result in hazardous ponded conditions.

Drop Curb inlets are always in a sag.

The capacity of a curb-opening inlet in a sag depends on water depth at the curb, the curb opening length, and the height of the curb opening. Curb inlets operate as weirs to depths equal to the curb opening height and as orifices at depths greater than 1.4 times the throat height. At depths in between, flow is in a transition stage. 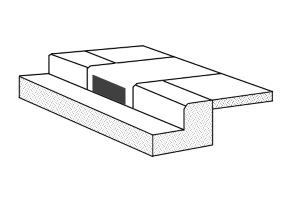 The equation used for the interception capacity of the inlet operating as a weir is:

The equation used for the interception capacity of the inlet operating as a weir is:

The equation used for the interception capacity of the curb inlet (depressed and non-depressed) operating as an orifice is:

Note that the inlet depths reported are measured from the lip of the curb opening, i.e., Depth = do + (h / 2) where h is the total opening. Inclined Throat Depth = Do + (h / 2)Sin(45). In transition flow, both equations are evaluated. The smallest Q is selected.

The height of the orifice in the above orifice equation assumes a vertical orifice opening or horizontal throat. As illustrated below, inclined throats can reduce the effective depth on the orifice and the dimension Do.

A limited curb opening length could reduce the capacity of the curb-opening inlet by causing the inlet to go into orifice flow at depths less than the height of the opening. 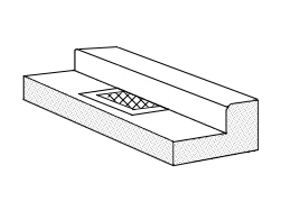 Grate inlets in sags operate as weirs to a certain depth dependent on their bar configuration and operate as orifices at greater depths. Studio Express uses both orifice and weir equations at a given depth. The equation that produces the lowest discharge is used. The standard orifice equation used is:

The weir equation used is:

Combination inlets consisting of a grate and a curb opening are considered advisable for use in sags where hazardous ponding can occur. Equal length inlets refer to a grate inlet placed along side a curb opening inlet, both of which have the same length. 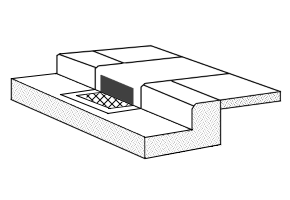