When it comes to modeling open channels, knowledge is power… translation, “job security”. As mentioned before, I want you to be the smartest one in the conference room when topics of H & H are at hand. This article aims to add one more notch in your H & H belt. 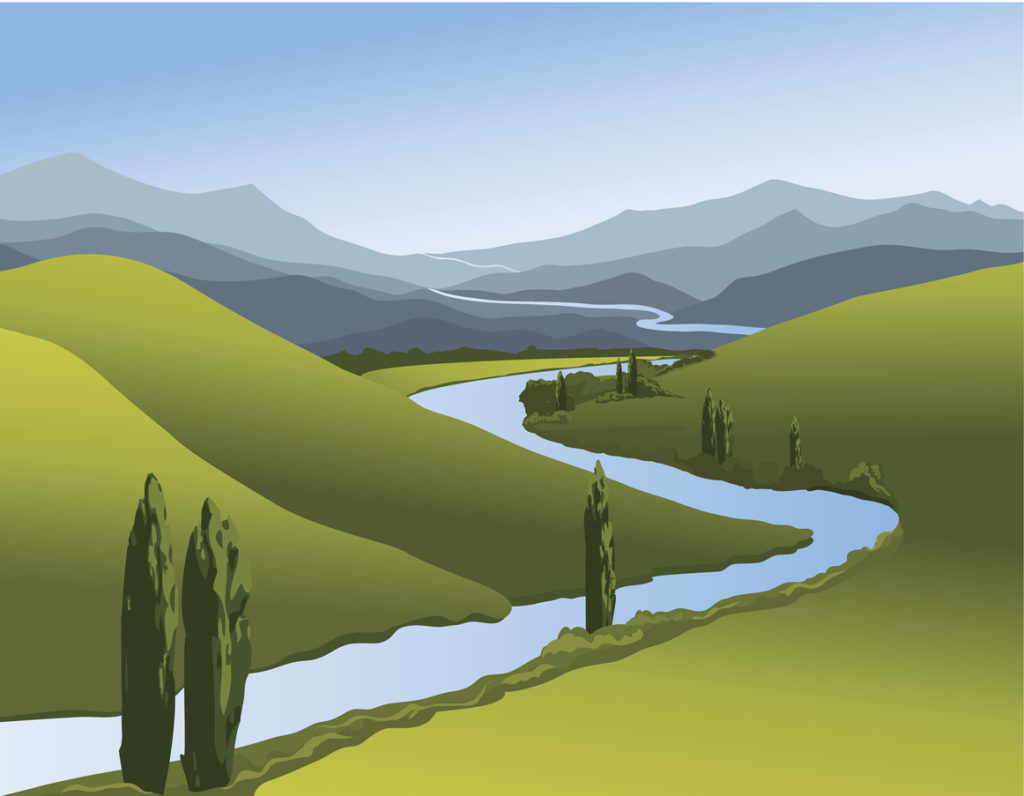 In almost every site development project there’s an open channel around the corner that needs to be dealt with. Just the mention of “backwater curves” or “floodplain encroachment” intimidates project stakeholders. Like deer in headlights, they instinctively freeze and then run for cover. Some brave sole breaks out the acronyms, HEC-2, HEC-RAS, HEC-[insert suffix here], WSPRO, FEMA, and more acronym-based software. Suddenly the project gets complicated and the conference room gets quiet.

Hands up from all those people who have calculated a water surface profile for an open channel. Anyone? Didn’t think so.

This article will bridge the gap between college and the real world by arming you with knowledge so that you can confidently approach these topics and think on your own two feet, without the federal government’s interference. You’ll also be able to quickly learn any open channel modeling software because you’ll better understand the inputs and what they’re used for.

It’s Easier Than You Think

Yes, calculating water surface profiles for open channels is easier than most engineers think. It’s easier than storm sewer systems, where you’re having to deal with those pesky junction losses, and it’s easier than modeling culverts with all those inlet control, outlet control, submergence concepts. With open channels there are no junctions, no inlets, no inlet control, none of that. There will be a bridge crossing from time-to-time which is discussed in Part III of this series… when completed. But even those procedures are easy work once you understand the basic concepts.

In just a few minutes, you will have a greater understanding of the basic calculation procedure which is the underlying foundation for successful open channel modeling. So here we go…

Three Things You Must Know

I have this advice for anyone in the civil engineering industry, especially those in site development or coming out of college with a BSCE and/or those of you with CFM attached to your title. If you remember only three things from your Fluid Mechanics class, let it be these. Without them in your drainage design toolbox, you’ll be walking with a limp.

This two-term equation will never fail you.

No matter what, velocity always, always equals the flow divided by cross-sectional area. Don’t depend on Manning’s equation for this. If you’re looking for velocity, look no further than the actual cross-sectional area of the water in the channel. Divide Q by that area and you’ll always get the correct velocity, guaranteed. What you should be looking for is the water surface, the hydraulic grade Line (HGL), that produced this Area. And to know the Area is to know the Energy Grade Line (EGL).

It’s the granddaddy of all H&H equations. There’s so much you can do with the energy equation it’s mind boggling. But for now, let’s stick to H&H for civil engineers. Orifice equations, weir equations, Bernoulli equation, etc., all derive from this Energy equation.

And that energy, at any given open channel cross-section, is made up of two parts, Potential and Kinetic. In our world, potential energy is Elevation Head (HGL) in feet (Y) and kinetic energy is V2/2g, a.k.a. Velocity Head. So at any point along an open channel, the energy is:

But there’s another visitor at this energy party, known as “Head loss” or HL for short. It’s actually not a loss, it just looks that way. It’s real energy that gets transformed into heat resulting from the friction between the water and the channel boundary, commonly called skin-friction drag. To quantify this loss we employ a special equation and insert it into our energy equation.

Every civil engineer has seen this equation a time or two and it doesn’t need much of an introduction, but it does need an explanation.

Manning’s equation is used primarily to determine energy loss due to friction implied by the n term, roughness coefficient. The A term is the actual cross-sectional area of flow. R is the hydraulic radius which is A divided by the wetted perimeter of that A. The equation is reliable up to about a 6 percent slope.

Choose any two points along an open channel, for example. Add up the kinetic energy, V2/2g, and the potential energy, (Y) at each point. That sum is the total energy or EGL. S is the slope of the line between those two points. The difference between the two EGLs represents the loss of energy due to friction, HL, and is S x distance between these two points (L).

Now that we’ve passed basic fluid mechanics it’s time to put that knowledge to work on computing a water surface profile for an open channel. We’re simply going to combine the Energy Equation with Manning’s equation. Then it’s just a matter of solving that equation between two adjacent channel sections.

Below is a plan view of an open channel reach that contains six channel cross-sections. The channel sections are simple trapezoidal shapes at differing elevations and bottom widths. Flow rates have been established. All it needs is a water surface profile. We will use what’s known as the Standard Step method.

In essence, the process involves just 2 steps, in this order, beginning at the downstream end, Section 1, and working upstream, section-to-section, until we reach Section 6.

Repeat for each Section until you’ve reached the end. Sounds pretty simple. Lets go through these two steps one-by-one. 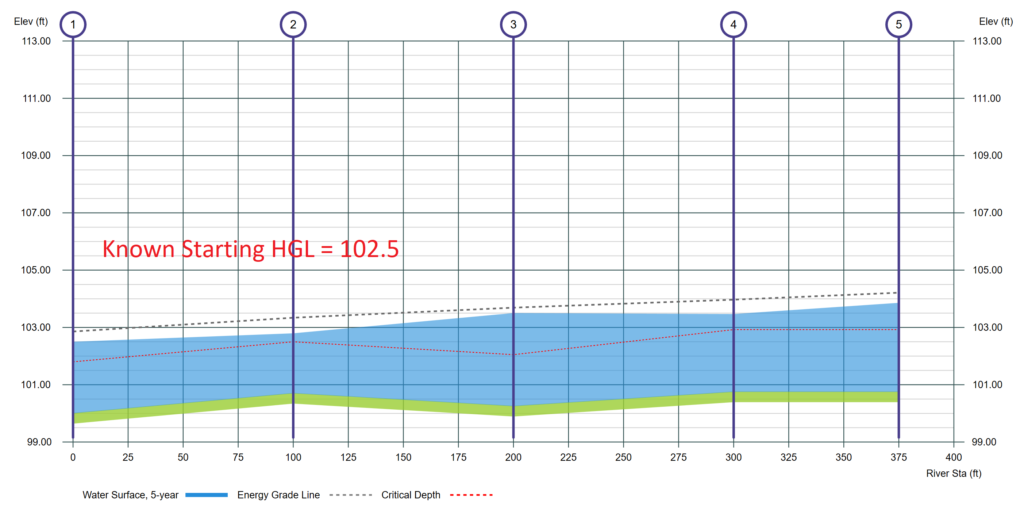 For the very first section, downstream, you’ll have three choices:

For all other sections, just use the HGL calculated from the previous section.

Step 2. Calculate the HGL for the Upstream Channel Section

This is where we use the Energy Equation with the added Head Loss (HL) component.

We already know the EGL Dn from Step 1. The goal now is to find the EGL Up using our new energy equation. Here it is in it’s completed form with S x L in place of HL.

A solution to this equation requires an iterative-based procedure. We only know V and Y at Point 2 (downstream). So we have to assume a water surface elevation, Y, at the upstream end, Point 1. Then compute Area, Velocity and Velocity Head. From that comes the EGL Up. Compare to EGL Dn + HL. If they don’t match within a desired tolerance, the assumption was incorrect. Repeat with a new assumed Y.

Once you have achieved an answer, repeat this process with the next upstream section and so on. The newly computed HGL is used for the variables on the left side of the equation.

In the real world, programs like Channel Studio, HEC-RAS, etc. will use an average S in order to better estimate the friction losses between sections. Known as the Average Friction Slope method.

Below are sample calculations from Section 1(downstream) to 2 (upstream) shown above.

We want to calculate the water surface at Section 2. We set the starting HGL at a known elevation of 102.50. From there we can calculate the parameters for the downstream side of the energy equation. Next we must assume an upstream Y. The first assumed Y is made by adding the depth of the downstream section to the invert of the upstream section, so (102.5 – 100.00) + 100.70  = 103.20. Educated guess, that’s all.

So that’s the basic calculation process. Applied to the sample six-section plan above reveals these profile results:

This is where the inexperienced modeler can get really confused, really fast. You’ll notice the EGL (black dotted line) decreases as you move downstream. That’s proper as you cannot gain or create energy. But notice how the water surface fluctuates between sections. The slope of channel bed from Section 2 to 3 is adverse but not the water surface. The water surface between Sections 3 and 4 slopes adversely because the channel width reduces from 10 to 7 feet at Section 4, causing an increase in velocity and velocity head. The water surface is always equal to the EGL minus velocity head. Thus the reduction in water depth.

Below is another interesting example of a simple trapezoidal-shaped channel with obstructions, similar to bridge abutments. Notice how they squeeze and reduce the area of the cross-sections. One would intuitively think that the water surface would rise as it flows through these abutments.

But in fact, it does just the opposite. The water surface drops!

Remember the Continuity equation, Q = V x A ? The abutments indeed reduced A, so V must increase to maintain Q. Subtracting the increased velocity head (V^2/2g) from the black dotted line reveals the true water surface as shown in the channel’s profile below.

Things get back to normal downstream once the cross-sectional area enlarges and velocity slows, velocity head shrinks, HGL goes up.

What’s interesting is that the water surface did rise. Over 0.50 feet. But not between the abutments. At the sections just upstream, where the cross-sectional area was untouched. How’d that happen?

Between the obstructions we have a decrease in Area, A, and thus R. So slope, S must increase to maintain Q. Sure enough, the slope of black dotted line between sections 2 and 5 increased. It raised the EGL upstream at sections 5 and 6 where you have a full cross-section, lower velocity, higher HGL.

Always remember… anywhere along that black dotted line, there can be only one combination of water surface elevation and velocity head. Energy rules and the Energy equation will always provide an accurate answer, regardless of the channel’s shape or slope.

So there you have it. The basic skill and knowledge of how to calculate a water surface profile for an open channel. It’s simply repeating a 2-step process which begins at the downstream end of your system working towards the upstream end. The Bernoulli Energy equation is used to compute the EGL. The water surface (HGL) is a consequence of the EGL, i.e., EGL minus Velocity Head.

The aim of this lesson was more about understanding the mechanics of water surface profiles than actually crunching numbers. You’ll most likely use a computer for that, and you should. But at least now you’ll know what goes on inside those black boxes, and have new respect for the EGL. It’s valuable knowledge that will have a direct and positive impact on your projects and your career skills.

But the real key to success is not crunching numbers, it’s knowing how to get the numbers, and when and where to apply them. Because not all open channel systems are as neat and uniform as the example given in this article. Most of the time the channels and sections are irregular in shape and slope with varied roughness. Part II of this series will teach you how to deal with real open channels.