Channel Studio follows the computational methods described in Hydrologic Engineering Circular No. 18, (HEC-18) for scour calculations. After performing the water surface calculations, and if the Scour input for D50 has been entered, scour is automatically calculated. There’s nothing else you need to input.

Both are described below.

Clear-water contraction scour occurs when (1) there is no bed material transport from the upstream reach into the downstream reach, or (2) the material being transported in the approach section is transported through the bridge section in suspension.

The Live-bed equation is utilized as needed for each sub-area, i.e., the Left overbank, Main channel and Right overbank.

The Clear-water equation is utilized as needed for each sub-area, i.e., the Left overbank, Main channel and Right overbank.

The actual scour depth, ys, is computed as:

The bottom widths of sections (W) are approximated by using the computed water surface top widths. 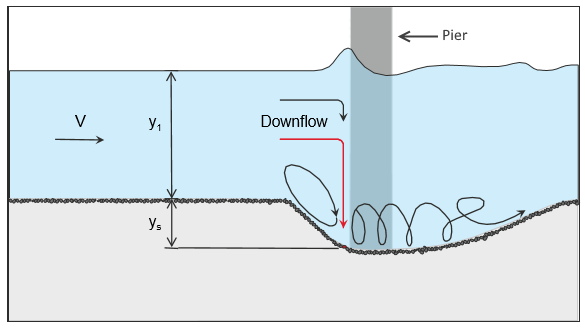 Channel Studio uses an equation developed by Dr. David Froehlich, 1991 for computing local pier scour. This equation is used in lieu of the HEC-18 Colorado State University equation due to its simplicity. This equation is also used as an alternate in HEC-RAS.

It should be noted that the additional + a (one pier width) at the end of this equation is simply a factor of safety recommended by Froehlich when designing. Channel Studio does not include this in its calculations.

The Pier Scour width is equal to 2 x Ys, to each side of the pier.